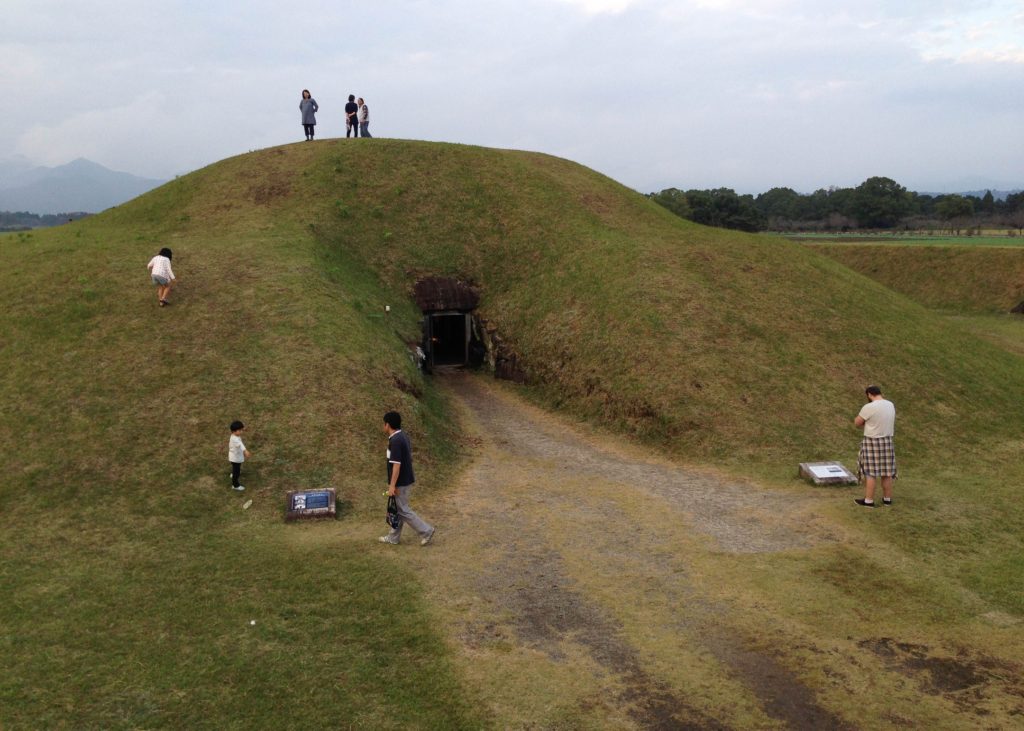 The Saitobaru Tomb Festival is an annual event held at the Saitobaru Burial Mounds, a cluster of over 300 burial mounds in the city that date back to a period between the 3rd and 7th centuries. Each tumulus has a mound, or funkyu, that contains a stone chamber and a coffin for burying the dead. Stretching for about 2 km (1.24 mi), the cluster is one of the largest found in Japan and was designated a special historical site by the Japanese government in the 1950s.

The festival begins with a procession that starts at the nearby Tsuma shrine and ends at a wooden hut in the center of the park. The hut is set alight and a dance begins, telling the love story of Ninigi-no Mikoto, the grandson of the sun goddess Amaterasu, and Konohana-sakuya Hime, the daughter of the mountain god Ohoyamatsumi-no-kami.

Konohana-sakuya, the blossom princess, and Ninigi, the god of rice, met on the the beach of Cape Kasasa and fell in love. But after just one night of marriage, Konohana fell pregnant and Ninigi accused her of cavorting with an earthly kami. In a rage, Konohana locked herself in a door-less hut and set it on fire, claiming that neither she nor their unborn child would be hurt if she had indeed remained faithful. Konohana gave birth to three sons in the hut – Hoderi, Hosuseri and Hoori – and emerged unscathed.

Visitors who arrive early can enjoy the cosmos blooming across the burial mounds. One tumulus – a large, two-tiered circular mound, stands at 7 m (23 ft) and is the only one of its kind in Japan. It is believed to have been the tomb of the last local chief of Saito. Excavated in the 90s, it is possible to see inside the stone chamber.