Miyazaki has been extremely lucky to be the recipient of the next International One Minute Projection Mapping Competition. A stunning exhibit that provides artists an opportunity to exhibit their creative ideas for the public to see. What exactly is projection mapping? It is a carefully developed beautiful display of moving imagery projected onto a large scale canvas such as the side of a building. Spectators watch in amazement as a typical building wall becomes an elaborate show of flowing imagery catered to suit a certain theme. 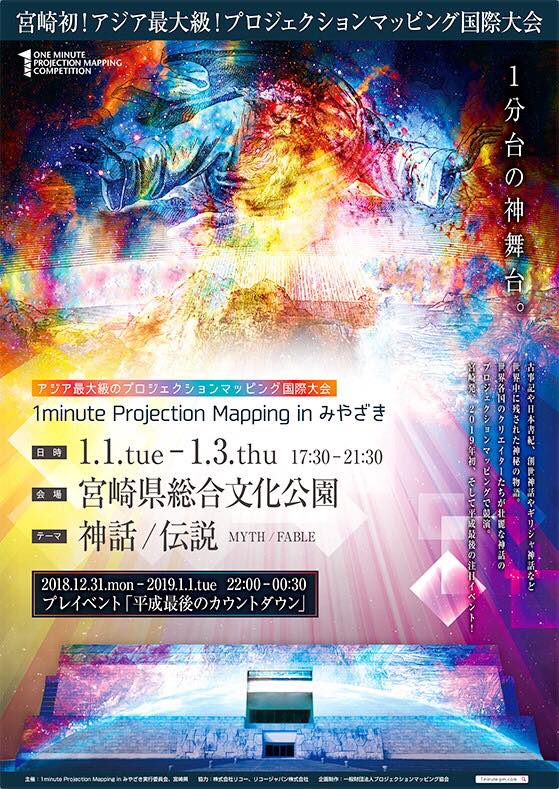 The One Minute Projection Mapping Competition was first held in Zushi City, Kanagawa Prefecture in 2012, and has since been held every year at various locations throughout Japan as well as Italy. Using tens-of-thousands of lumens-projectors, the event has garnered international attention and brought in viewers among the thousands each year. In previous years, teams of artists from more than 20 countries and regions exhibited their works.

Projection Mapping has gradually become a very popular form of media, which comes as no surprise given the scale and wide-appeal of the art form. Not only are the images projected into nearly living, breathing landscapes and entities, but it seems the artists also take careful consideration into how their presentation meshes with the chosen buildings to be projected upon. The result is a presentation that fills viewers with a sense of wonder and awe.

This year’s demonstration is centered around the theme of myths/ fables, which will surely amount to some incredibly interesting works.  The Competition will take place at The Miyazaki Prefectural Art Museum (宮崎県立美術館) from January 1st-3rd, 2019. If you are in/around the Miyazaki area it is an event you won`t want to miss! For more details, check out the official website here➡http://1minute-pm.com/en/